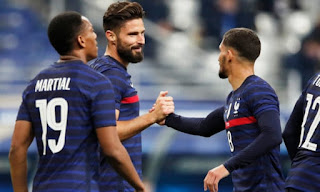 Olivier Giroud became France’s second highest all-time top scorer on Wednesday in a 7-1 win over Ukraine, scoring twice to leapfrog Michel Platini’s total of 42 goals, and is now gunning for Thierry Henry’s all-time record of 51.
Giroud celebrated his 100th cap in style in front of the visitors’ coach, Andriy Shevchenko, one of his idols.
“I feel a lot of pride, it’s a great honour for me and I’m happy it happened for my 100th cap,” Giroud told French TV channel TF1. “I’m happy I did it on front of Shevchenko, he was one of my favourite players, if not my favourite player when I was a teenager,” the Chelsea forward said of the former Milan and Ukraine striker, winner of the Ballon d’Or in 2004.
Eduardo Camavinga opened the scoring for France with a brilliant bicycle kick, becoming the second youngest player ever to score for Les Bleus, aged 17 years and 11 months. The record was set by Maurice Gastiger in March 1914, when he scored against Switzerland aged 17 years and 5 months. An own goal from Vitaliy Mykolenko and goals for Corentin Tolisso, Kylian Mbappé and Antoine Griezmann completed the rout.
The midfielder Florian Neuhaus scored on his Germany debut but Turkey came back three times to earn a 3-3 draw. Kenan Karaman slotted in a stoppage-time equaliser after Luca Waldschmidt fired in an 81st-minute volley that had put Germany 3-2 ahead. Turkey twice before had levelled, in a match in which both teams were missing several regular players.
“We invited Turkey to score goals and again failed to hold on to victory,” Germany captain Julian Draxler said. “We have to be more dominant.”
Mexico handed Frank de Boer, the new Netherlands coach, a defeat in his first game in charge as they enjoyed a deserved 1-0 win over their hosts in Amsterdam.
Giroud goes past Platini in France all-time scoring charts